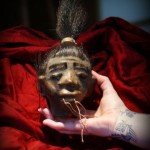 I have been invited to go to a writing retreat in Crete next month. I was really excited until I read that the participants were to bring several “totems” of importance with them. Totems. Totems? Panic.

Just in case I was jumping to conclusions about New Age wank, or clan of the bare bears stuff, I looked up “totem” in every dictionary and reference book imaginable. I was right. This is not my bag, though I know that there are people who LOVE this sort of thing. It just isn’t how I work.

It reminds me of exercises I faked my way through in theatre school decades ago. But I’m a grown-up now. So instead of pretending that I have totems, I contacted the two fabulous poets running the retreat and said, “Look, I don’t do totems. I don’t have them. Years ago I’d have brought ben wa balls to the retreat and would have pretended they were important to me but I don’t actually own any.” I think I was the only person laughing about ben wa balls. I told them that I couldn’t be trusted to behave and wouldn’t be attending the totem talks or other show and tell sessions.

Of course then I started picturing the other participants with their pet rocks and old locks of hair tied in tartan ribbons – and I started to spend a lot of time thinking about if I had a totem, what would I bring? I considered my grandma’s ashes – that would be dramatic. But my grandma would have been annoyed by that – if she was alive and wasn’t just a pile of ashes.

And then it occurred to me that this was a wonderful excuse to get something I’ve wanted ever since I was a little girl – a shrunken head. And here he is – all the way from the Amazon – the totem to top the totem pole. That’s if I was going to the totem talks, but I’m not.

I’d like to bring him to Crete because I’m Olympic competitive. But there’s a problem. My shrunken head stinks. Not a little – I can smell him across the room which means a sniffer dog could smell him from another airport terminal. And I’d hate to lose my tsantsa before he’s had a chance to dictate his book to me. He says it’s called The Body. I told him Stephen King already wrote that. Now he’s sulking in his box. (I made that last bit up. If I was going to the totem talks, that would have been the sort of thing I’d have said, but I’m not going. I’ll be in my room finishing my next book.)

Ooooo, now I’m getting excited about going to Crete again – and I own a shrunken head. My hand smells. I’m going to go wash it now. 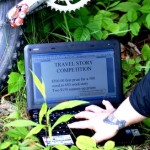 I’m going to be moderating the travel story competition judging debate for Leap Local in the autumn. There’s a $500 first place prize (for just a 500-650 word story) and there are two $150 runners-up prizes. END_OF_DOCUMENT_TOKEN_TO_BE_REPLACED

By Kirsten Koza on December 12, 2010
Kirsten’s suspenseful comedy Meet the Teacher Creature received a week workshop at Lighthouse Festival Theatre in Port Dover. At the end of the process was the first public reading of the play.

By Kirsten Koza on December 12, 2010
Kirsten moderated the judging debate for the Leap Local travel story competition, not that Kirsten or any of the judges are moderate — for example, one of them accidentally urinated on Idi Amin, and another did time in a Pakistani torture prison and his 11th book was lauded by Time as a top ten book of the year.