Browse: Home / Behind the Scenes

Behind every story is another story, just like the dirt under your fingernails reveals the truth to the forensics lab.

When someone reads my glossy story in DreamScapes Travel magazine, they might think from a heading inserted by the editorial department that I thought Machu Picchu was a trip of a lifetime, when in fact it was closer to being a trip to a life sentence in a Peruvian prison as I seriously contemplated pushing my annoying guide over the 8,000 ft edge. Instead I waited for her to turn her back and then I hid in a sacrificial chamber until she gave up looking for me (I’m not actually sure that it was a sacrificial chamber, as I didn’t have a guide to tell me what it was).

Behind the Scenes will reveal the truths and gritty details behind the job or story. 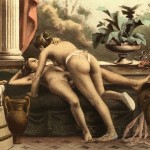 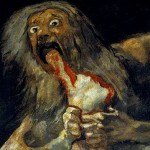 According to Cornell University Law School, there aren’t any laws in the US prohibiting cannibalism (the nonconsensual consumption of people).

In July (2013), Tyree Lincoln Smith (Fla.) was found not guilty for gorging on a vagrant. Then on Sept. 9, three Superior Court judges committed Smith to 60 years in a Connecticut psychiatric hospital. They feared he’d eat more humans if left free to roam.

Unlike Tyree Lincoln Smith, or serial killer Jeffrey Dahmer — whose flesh fetish landed him in prison — many cannibal cases are cases of survival.

Every time I fly over the Andes Mountains I look at the icy peaks piercing through the clouds and imagine the infamous 1972 plane crash survivors eating their frozen rugby teammates to stay alive.

But last month I tucked into alpaca steak and was overwhelmed by the maleness of the alpaca meat. My little alpaca had that masculine essence of a big buck killed by a car instead of a bullet.

Would the meat of a human male killed in a plane crash have the overpowering rankness of roadkill buck? Maybe women would taste better. And what is that man taste — is it hormonal?

I knew the perfect expert to ask, so I fired off a Facebook message to Paula Lee, PhD, at University of Chicago, author of the new book “Deer Hunting in Paris; a Memoir of God, Guns & Game Meat” and, on a more serious note, author of “Meat, Modernity, and the Rise of the Slaughterhouse.” END_OF_DOCUMENT_TOKEN_TO_BE_REPLACED

Romeo and Juliet Gets Death Threats 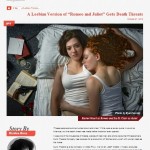 I wrote an article for The Blot magazine about the death threats that Curio Theatre Company received for a production of Romeo and Juliet because they’d cast two women as the young lovers. My article ended up winning the most viewed article of the month at the magazine (and I got a bonus cheque for that) but I received some serious flack for writing the story too. I had a sleepless couple nights.

Comments Off on Romeo and Juliet Gets Death Threats  |  Filed under: behind the scenes  |  Tags: No Tag 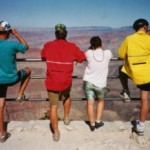 “It’s the Painted Desert, right to the horizon,” Hamish panted in the lead of our peloton of five mountain bikes roaring down the empty Arizona road.

“Stop riding so close to me,” I said to Malcolm who was beside me and swerving as usual. But when he biked behind me he constantly scrubbed my back tire with his front tire. I wasn’t sure which was worse. END_OF_DOCUMENT_TOKEN_TO_BE_REPLACED

Comments Off on The Pain-ted Desert  |  Filed under: behind the scenes  |  Tags: No Tag 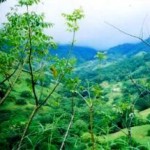 Phaseolus Vulgaris—Costa Rican Mr. Bean: A cyclist was overtaking me on the up-hill through the jungle. A grown man on a child’s bicycle with banana seat, monkey bars, no gears and no oil on the chain, was passing my fancy new mountain bike. The Costa Rican local in a pristine white dress shirt, ball-breaking white jeans (that would have been the envy of a matador), and black leather dress shoes, was unconcerned that his knees were hitting his ears. He casually smoked, one hand lightly on the monkey bars and the other flamboyantly holding his cigarette. He left me in a cloud of extra-strength no filter as he squeaked and rattled by. He crested the hill in a puff of smoke and was gone. 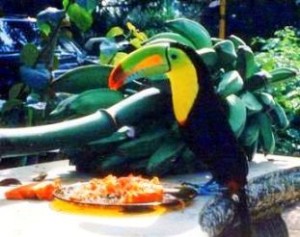 Children from the nearby village laughed at me. It was humiliating. How did he do that? I was fit. Maybe it was like an episode of Costa Rican Mr Bean, which meant Señor Pinto would be on the other side of the hill, lying in the foliage, having a heart attack from faking lack-of-effort on the incline.

I panted over the summit. He was nowhere. 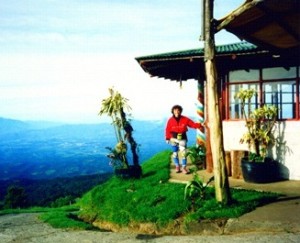 Sometimes I fantasize that Señor Pinto was devoured by a toucan. Foo Foo (in the above photo) terrorized me at Las Orquideas Inn, stole my breakfast, and bit my bum through a deckchair. I deserved to be bitten for wearing those tights (in photo on right) which were a gift.

Comments Off on Phaseolus Vulgaris—Costa Rican Mr. Bean  |  Filed under: behind the scenes  |  Tags: No Tag
1 2 Next »