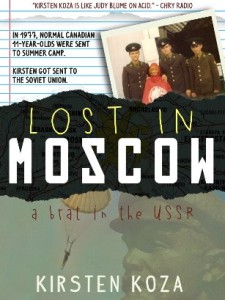 Book Description: When most parents consider sending their child to camp, they imagine a sunny lake a few hours from the city. In 1977, the parents of 11-year-old Kirsten Koza sent their pigtailed, sass-talking offspring on a trip to the Soviet Union — with only fifty dollars in her pocket.

Lost in Moscow tells the story of Kirsten’s summer camp hi-jinks: evading the Soviet Red Army in a foot race through and around Red Square, receiving radiation treatments for a minor case of tonsillitis, and making a gut-churning, unauthorized parachute jump — without being certain whether her parachute would open or even stay on.

Told from the point of view and in the voice of the young Kirsten, Lost in Moscow is sex, politics, religion, fashion, and finance through the eyes of an eleven-year-old. Hilarious and hair-raising, this is a highly unusual travel memoir — a story about children, but definitely not for children. 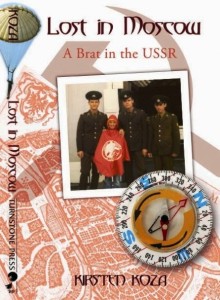 Kirsten Koza is a humorist and adventure travel writer. Her first book, Lost in Moscow, was published by Turnstone Press, in 2005, in paperback and is now also available as an e-book from Kindle and Kobo.

Kirsten has a BA in theatre from Dalhousie University in Canada, and completed the post graduate programme at East 15 Acting School in England. 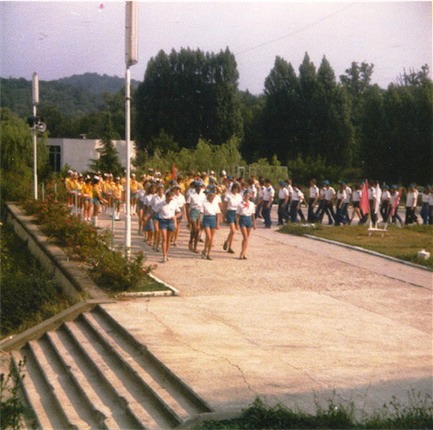 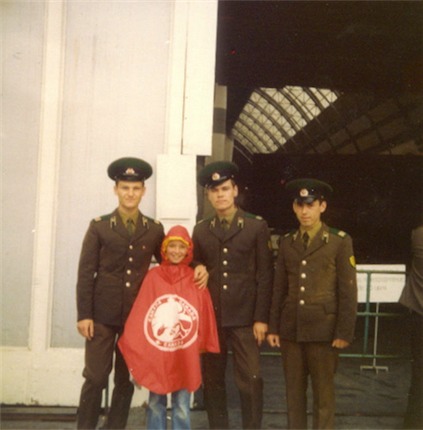 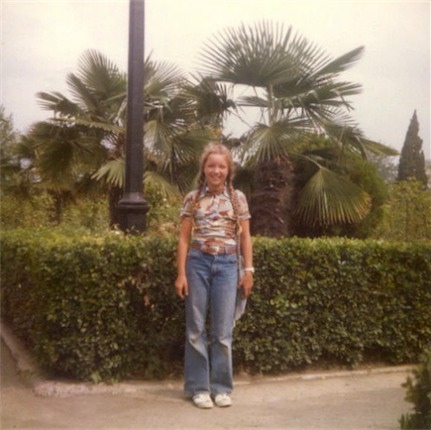 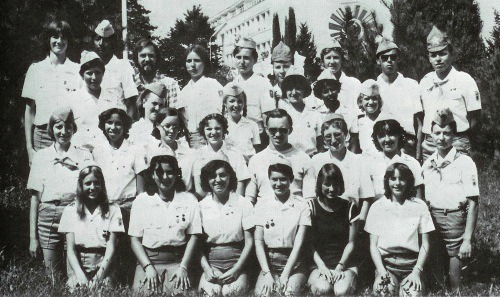 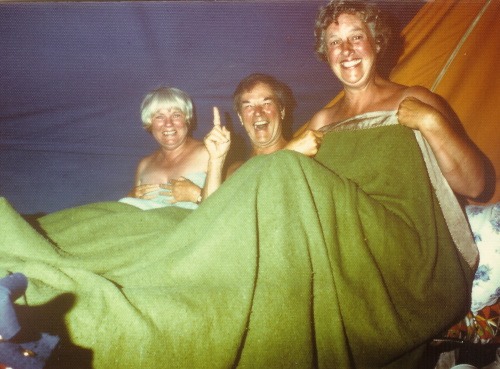 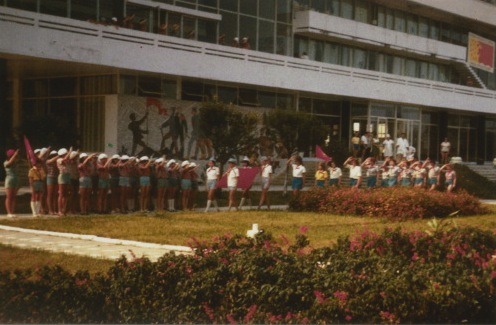 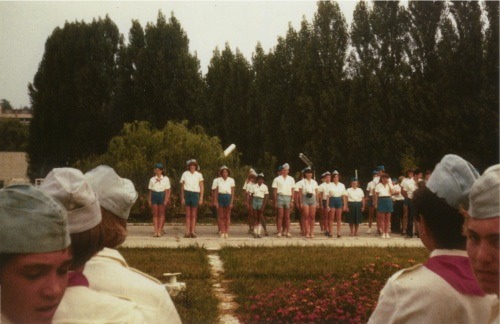 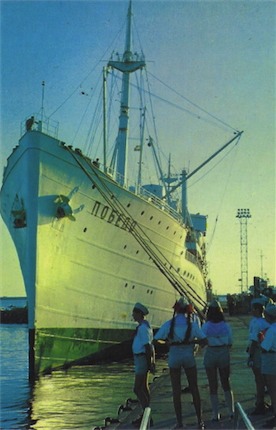 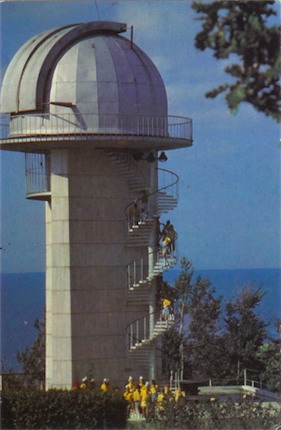 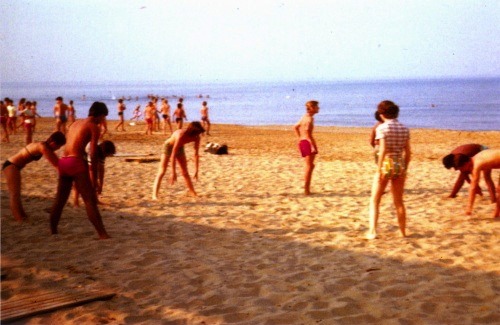 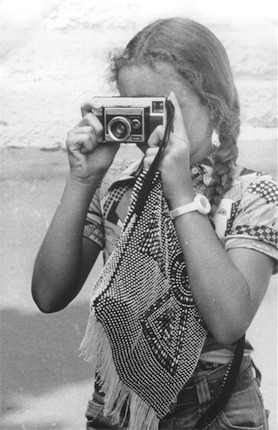 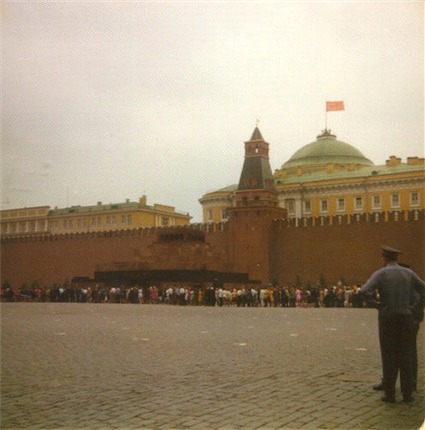 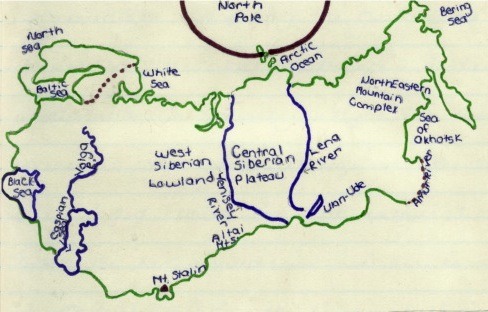 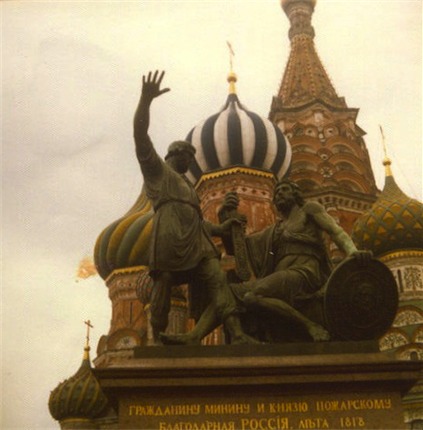 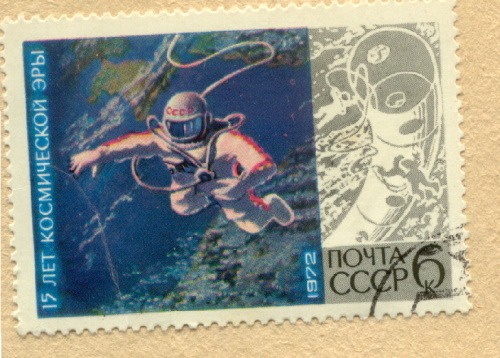 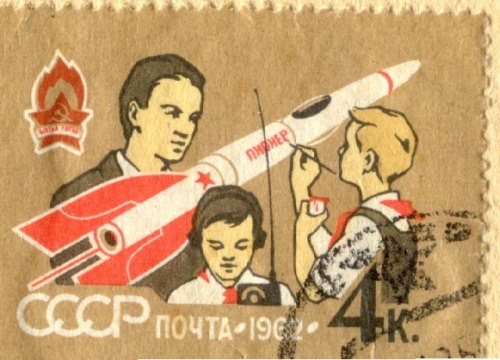 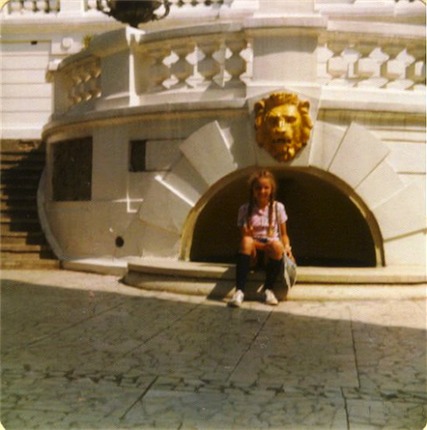 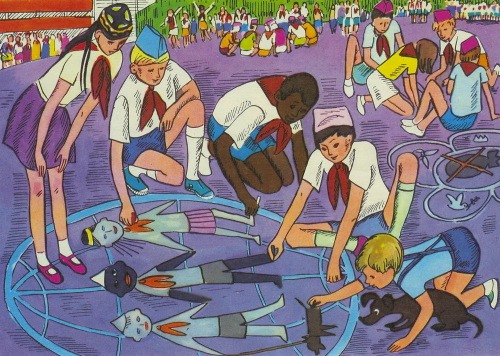 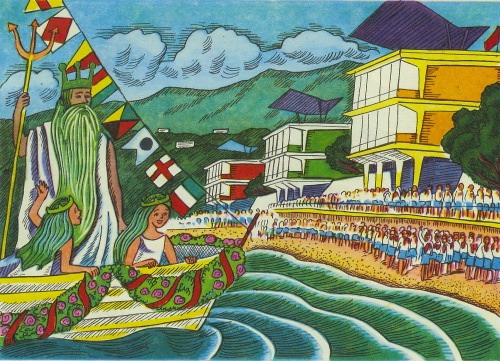 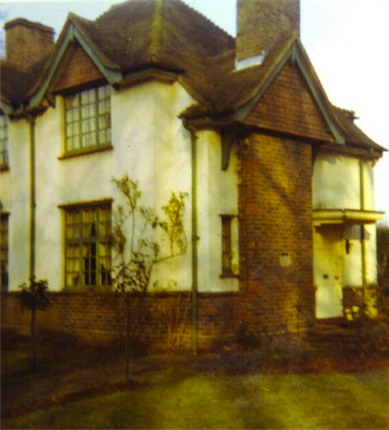 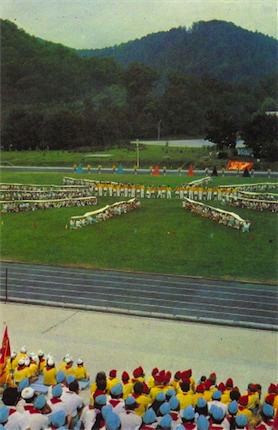 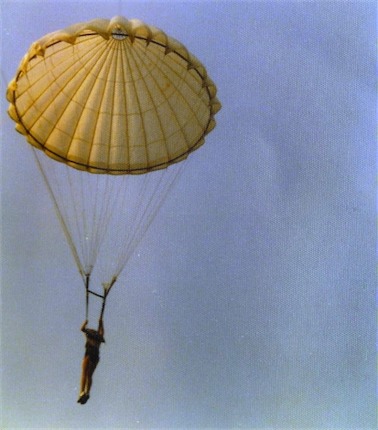 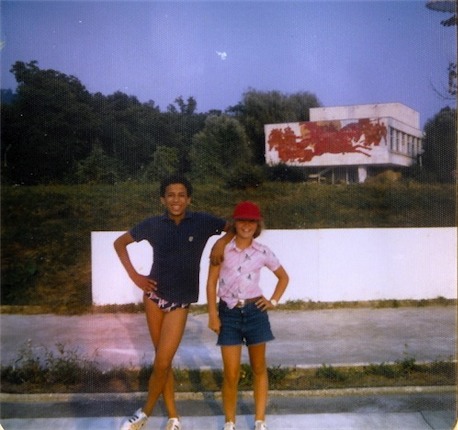 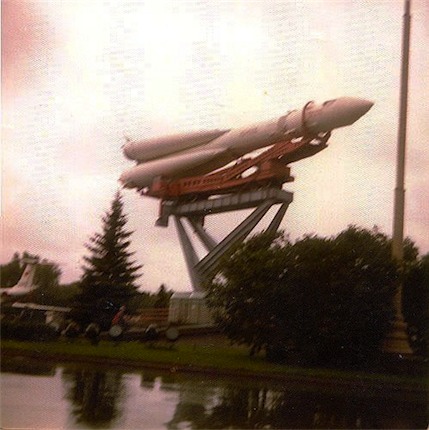 Book Reviews in Print and On Air:

Tough Drum magazine did a 3-page piece (see page 1, 2, 3 or text only) on Lost in Moscow. This youthful edgy magazine used the word “ethnographical” in the first sentence of the article and Kirsten had to apparently look in her Oxford Concise to verify she knew the meaning.

New Canadian Magazine said, “Some writers are famous for writing love poetry — Pablo Neruda, for instance. Others, like Scott Adams, have managed to pin to the page the preposterousness of corporate America. Rohinton Mistry is known for his poignant portraits of Mumbai; Sir Arthur Conan Doyle changed the face of detective novels by creating Sherlock Holmes. But no one can describe an unfamiliar bathroom quite like Kirsten Koza.”

They also declared, “Lost in Moscow: A Brat in the USSR is an excellent read. Touted by its publishers as ‘a book about children, but certainly not for children’, it is light, uproariously funny, and will leave you feeling 10 years younger. From Russia with love — and lots of laughter!” Review by Geeta Nadkarni.

Uptown magazine: “Koza winningly writes from the perspective of a teenage girl….This is a really funny book. Koza, who has a degree in theatre, knows how to tell a story.”

They do appropriately mention later on “The text is sprinkled with some four-letter words, references to an awkward understanding of sexuality and one underage drinking incident,” but they recommend that it is fun to read and that it may well still be enjoyed by the younger set.

You can read the article here.


In the Hills magazine: “Lost in Moscow is a funny and fascinating look at the Western World’s bogeyman of the day—communism—through the fresh eyes of a child.”
Click here to read the article which appears courtesy of the magazine and the reviewer, Tracey Fockler.
Prairie Books Now interviewed Kirsten about Lost in Moscow: A Brat in the USSR in their piece titled “FORGET WEENIE ROASTS , an 11-year-old camps out in Moscow.” Kirsten actually said in this interview at one point “You can’t spank me now!” The article has been supplied courtesy of Prairie Books Now and Polly Washburn.

The Georgina Advocate used the word “turd” which was a first for this newspaper according to its managing editor. The best quote from this review has to be “Lost In Moscow, A Brat In The USSR, is a delightful — if occasionally scatological romp —begging for a screenplay”.

✩✩✩✩✩
Not Eloise’s Summer Vacation
Gary Buslik
(American travel writer and author and PhD professor of literature at University of Illinois at Chicago.) Eleven-year-old Kirsten is a smart-aleck who happens to be much smarter than her clueless family and socialist adult friends, who still believe the Soviet-Union-utopia myth. She peels the layers of their stupidity with charming silliness and go-girl bravery. The funniest scene I ever read in any book is the one in which, as her classmates and leaders weep with maudlin goofiness at the prospect of leaving Russia, Kirsten tries to manufacture tears by imaging her parents on fire. But even that doesn’t work.This isn’t Eloise’s summer vacation. Koza writes with biting wit and delicious irony. A fun read, yes, but also for those who enjoy witnessing intelligence at work.

✩✩✩✩✩
An Amazing Camp Adventure
Carol RiddellLost in Moscow was so much fun to read, I found myself wiggling with giggles at several points. Kirsten Koza did such a great job re-creating the secret thoughts, angst, fears and dreams of her 11-year-old-self that I felt like I was right there as a kid, too! It’s been awhile since I’ve thought about expressions we used in the seventies – and how much passion and fun we had with them … and toe socks!However, this camp experience was so bizarre and harrowing that, at times, I found myself feeling more like a parent — wanting to get that girl out of there! My 15-year-old daughter was also impressed with this book – and the things she learned about the USSR were quite an eye-opener for her. She now tells me I should have forced her to keep a journal at a younger age, so she could write like this too!Kirsten has a nice, natural style of writing, with dialogue and descriptive settings that put me right in the scene. Bravo! I’m looking forward to her next book.

✩✩✩✩✩
Lost in Moscow is fabulously funny, furiously fast and frightening
Travel-Bug “G.L.”Too bad western parents!….you can’t avoid your pre-teen’s puberty by sending them to Soviet summer camp in the USSR anymore!In 1977 the author’s parents did just that and a good thing too, because now we get to read about Kirsten Koza’s hilarious culture shocking experiences at communist-Russian summer camp. The Black Sea camp this cheeky girl was sent to boasted cosmonaut training, had lawns dotted with war-planes and was where the Soviet Union sent all it’s top athlete-teens and highest academic achievers and then there was Kirsten, a citizen of the UK and Canada, and just a regular 11-year-old girl. The end result is the funniest book I’ve ever read!Can the commies convert this little capitalist? Can she ever learn to stomach the camp delicacies like whole boiled under-cooked cow tongue with taste buds and skin still on? Can she draw a picture that won’t offend the Soviet government? Can she survive being radiated in a Russian sanatorium, the vodka, the humiliating toilets, or a parachute that doesn’t fit? Well I guess she must have because she lived to write the book… but I was never quite certain if she’d survive the next embarrassing or dangerous moment as I lived that summer through her eyes.

Lost in Moscow is a brilliant read!

From Amazon.com:✩✩✩✩✩
A Dramatic Travelogue
By Garry Craig Powell (writing professor and author)I’ve never read a book like this. “Show, don’t tell” is the most frequently-repeated axiom about writing, and yet even fiction usually mixes scene, or dramatic writing, which takes place in real time, with exposition and summary. In nonfiction, there’s generally more exposition and summary–more telling, in other words. I would say that the proportion of scene (showing) to exposition and summary (telling) in Lost in Moscow is about 90% to 10%. We follow eleven year old Kirsten Koza on her summer trip to the Soviet Union in 1977, and hear, so it seems, everything she hears, see everything she sees, taste and smell and touch all that she comes into contact with. So, for a start, it’s a remarkable glimpse into the mind of this precocious child–a “brat”, as she calls herself, and might have been called then, though nowadays, in the post-feminist era, I suspect that “sassy” or “feisty” are the epithets most people would apply to her. It also enables us to see the Soviet Union, through fresh, unprejudiced eyes, which is fascinating and often very funny. (The most hilarious incidents are probably when Kirsten and her friend are chased across the Red Square by policemen, and when Kirsten and the same friend manage to make a parachute jump, from a tower, without permission of their guardians.)Bold as Ms. Koza’s narrative strategy is, one has to ask: does it work? Clearly the book is a tour de force of technique, but does the reader miss the reflections of the older, wiser author? If you’re looking for a considered adult opinion of what life in the Soviet Union was like, you might be disappointed, but perhaps that would be missing the point. What the author wishes to do, clearly, is to put the reader in her shoes, to make you experience what she did, and she does this with unrivaled immediacy and vividness. Furthermore, although there’s very little data or history in the book–little Kirsten has no interest in five year plans or in Leninist doctrine–she sees very clearly what her adult guardians often fail to see, and does so with wit, energy and verve.I had just read one of PG Wodehouse’s novels before I read Lost in Moscow, and can honestly say that I found the latter just as amusing. I highly recommend it.

These are the readings Kirsten usually does for schools and at other events.

She starts with an excerpt about sitting on the toilet contemplating cannibalism while telling fibs in her diary because there wouldn’t be the book “Lost in Moscow” at all without that little travel diary she was forced to write in by her mother.

The Moscow toilet was her first taste of culture shock – and the Soviet pop machine was another taste — it had a shared glass — all of Moscow drank from that glass — and it is probably why Kirsten ended up sick, in a Soviet hospital, where she was forgotten in public in plain view with a rectal thermometer sticking out of her bare bottom.

Kirsten was terrified that she wouldn’t be released from the hospital ever and she had to creatively hide her food so they’d think she was healthy and eating.

You can read the excerpts here.

✩✩✩✩✩
"So much fun to read, I found myself wiggling with giggles..."

✩✩✩✩✩
"A fun read, yes, but also for those who enjoy witnessing intelligence at work."

✩✩✩✩✩
"The funniest book I've ever read! Lost in Moscow is a brilliant read!"

✩✩✩✩✩
"The author has the uncanny ability of making the reader feel young again."