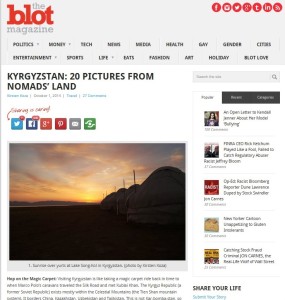 (My Kyrgyzstan story and photos were first published in TheBlot Magazine, Wall St., New York, in 2014. The magazine’s owner–a Wall St. billionaire–is currently in serious hot water with the FBI. That’s another story. I had an out-of-this-world trip in Central Asia thanks to Travel Experts.)

Hop on the Magic Carpet: Visiting Kyrgyzstan is like taking a magic carpet ride back in time to when Marco Polo’s caravans traveled the Silk Road and met Kublai Khan. The Kyrgyz Republic (a former Soviet Republic) exists mostly within the Celestial Mountains (the Tien Shan mountain system). It borders China, Kazakhstan, Uzbekistan and Tajikistan. This is not Kar-bomba-stan, so don’t let the “stan” scare you from having a cultural adventure of a lifetime in nomads’ land.

Vodka Guzzling Muslims?: Most of the Kyrgyz people are Muslim, but their beliefs are mixed with shamanism and also atheism which was enforced by the Soviets. The women aren’t veiled and are educated, vodka is enjoyed by many (mostly men, though) and going to a mosque is occasional for most.

Bride Kidnapping Saves on Wedding Bills: At the National Horse Games held in Kyzyl-Oi, Janarbek (a young man from the Sayak tribe) approached my translator Janarkul and asked her if she’d compete in the Capture the Girl competition (also known as “kiss the girl”) because they were short a competitor. The game smacks me in the face with the real-life tradition of bride kidnapping which, although made illegal in 1991, still happens in Kyrgyzstan, but not to westerners. Sergey Gluhoverov and Cholpon Soodaeva, at Travel Experts, told me that Kyrgyz nomad men want demure women who are skilled at making fermented horse milk and felt. Janarkul tentatively asked me if I minded if she competed in the games — of course I didn’t mind.

Tribe Pride: Janarkul is from the clan Taz and the tribe Sarbagysh. She can draw her family tree (nomadic clans) back to around 1276 by memory, and then she can connect her tribe to the original Kyrgyz tribes. She told me that most Kyrgyz can do this. Like Janarbek, she is from a small village of just four clans. She’s comfortable in the saddle, but riding in the games is a bit like being asked to compete in the Olympics when you haven’t been training. Jana has spent the last five years away at school where she is a fully granted student at the Turkish university in Bishkek.

Punch the Boy: Janarkul didn’t speak Turkish before attending the university. She speaks Kyrgyz, Russian and English and had to learn Turkish in her first year. The determined 20 year old told me before the competition that she was not going to be captured and was going to try to leave Janarbek kissing the air, however, she intended to catch him in the second part of the event — “punch the boy.” Her efforts left her bruised and sore, with a prize of cash and chocolate bars — and also with an invitation to compete again next year.

Fermented Horse Milk: The still-popular traditional drink of the Kyrgyz people is kumis, fermented mare’s milk. It’s drunk in such vast quantities that it could be considered a staple. Although kumis is often compared to kefir, unlike kefir, kumis has a mild alcoholic content which is due to the higher level of sugar in a horse’s milk. The milk is always fermented since, when fresh, it is reputed to be a laxative. People unused to even the fermented version might find adverse effects and many vomit after trying kumis, so you might want to rein back the temptation to chug it. The first and last time I sampled kumis, it had been fermented in a smoked goat’s stomach. The alcohol content of kumis is not high enough for me to make the after-effects worth acquiring a taste for the pony cocktail.

Galloping Gourmet: Nomads prize their horses above anything else, thus, it might seem unusual that the Kyrgyz also consume the flesh of horses. When my translator first showed me the pictured sausages and said they were horse, I thought I was looking at stallion manhood, but they’re horse-fat and horse-meat sausages. Horses are only killed for feasts for important events such as funerals. At a whopping 800 Som for 2.2 pounds (around $15 U.S.), horse sausages are a special occasion sausage.

No Fast Food Here — We’re Kyrgyz: There aren’t any western fast food chains in Kyrgyzstan yet, but modernization might be just around the corner as in 2015 Russia wants Kyrgyzstan to join its Customs Union (Putin’s version of the EU — though some joke that it is an attempt by Putin to put the Soviet Union back together again).

Eat, Prey, Kill: Artsan Sagymbaev (of the tribe Bugu and the clan Jalgap) keeps his family’s tradition alive. He is a 6th generation eagle hunter in Bokonbaeva (a village of eagle hunters) on the shores of the salt lake Issyk-Kul. An “eagle hunter” means hunting with an eagle, not hunting for eagles. Artsan proudly showed me his eagle Saryeiji’s kill from the previous winter; his 8-year-old female bird had caught an 88-pound bobcat.

Got Your Goat: Kok-boru (which means “grey wolf”) is a rough horse game which originated as a nomad hunting exercise. To the untrained eye, it looks like a scrum of rugby players wrestling on horseback between two goals, but the players all have positions and jobs, such as guarding the pin (the goal). Good players have national celebrity status and remarkable horse skills. The players need to be able to pick the “ball” (a dead goat) off the ground while in their saddles, ride with the cumbersome and heavy game-piece and wrestle it from other players. A goal is scored when the goat is stuffed into the pin, a small hole inside a larger ring in the opposing team’s end zone.

Tender Vittle: As I waited for the game of Kok-boru to begin, an announcement was made that it would be just five minutes longer as the goat was being “prepared.” I knew what this meant. Billy was being slaughtered, decapitated and having length chopped off his legs. The animal was brought to the playing field still bleeding and, although newly dead, it looked like it was still twitching with life. Animal-rights activists have complained about this; however, Kyrgyz people wouldn’t waste a goat. After the game, the now-tenderized goat is eaten. The goats are donated to a family in a nearby community who are known for their outstanding service, or to a family that has an upcoming wedding to celebrate. After the game I attended, the goat was awarded to the captain of the team. The players were on a rotating roster to donate a goat for each game.

No Matter What the Locals Say, Vodka Does Not Cure Altitude Sickness: The average elevation in Kyrgyzstan is approximately 9.022 feet above sea level, and its tallest peak is 24,406 feet. The Kyrgyz nomads move their livestock up and down in elevation with the seasons. The landscapes vary from jagged peaks to colorful red, white and blue-striped badlands, mineral-rich mountains (whose minerals cause rivers and lakes to take on exotic hues), alpine meadows, impressive glaciers and pine forests. There are less than 6 million people in Kyrgyzstan, and more than 70 percent of the population is Kyrgyz, around 14 percent are Uzbek and 10 percent are Russian.

Nomad Tax Evasion: Yurts are collapsible, portable homes made of sheep’s felt layered over a wooden frame. While people often assume a nomadic life means the freedom of moving wherever one chooses, that’s not actually the case. The nomads are territorial, and the same families erect their yurts on the same land that their forbearers did for many generations. They don’t own the land, the government does now. While at Lake Song-Kol where my translator Janarkul’s grandfather had his yurt, Jana informed me that the government taxes the nomads by placing a tax per head on their livestock. I asked her if the nomads ever hid animals so as to avoid paying tax, and she said, “No.” I was suspicious of her response, so I encouraged her by saying, “That’s what I’d do if I were a nomad. I’d go higher into the mountains with some of my herd and would hide them.” Jana laughed, saying, “Yes, that’s what they do. We know what day the government is going to be sending the tax-people to count the animals, so the shepherds hide some of the animals higher in the mountains.”

Holy Rumpelstiltskin: There is a still practiced tradition today among the Kyrgyz people in which the eldest son’s first-born son is taken by the grandparents to be raised like their own. My translator’s parents “took” her brother’s first-born from her sister-in-law.

Don’t Judge a Book by its Cover: A Kyrgyz woman might be dressed traditionally or be known for her kumis or carpet making or she might have received an award for giving birth to seven children or spend a lot of time hand-rolling yogurt cheese balls, but at the same time, she might have a degree in economics and a job with the government.

Nomads’ Land No More: The Soviets forced the Kyrgyz nomads into settlements. The nomads didn’t go willingly, and it was a violent time in history. By law, all Kyrgyz children had to go to school, which is still true today. The forced settlement forever changed the way of life of the nomads. Now, many live in villages in valleys and basins during the winter months and then in the summer return to their nomadic pastures with their livestock.

Getting There: I used FlightFox to book my plane tickets to Kyrgyzstan. A team of real people actually search for the best deals, taking into consideration your personal wishes, whether that be cheapest price, short layovers or most direct route. The cheapest flight was on Aeroflot, which flies direct from North America to Moscow, then to Kyrgyzstan in Central Asia. They no longer serve vodka in economy on these flights, but you do get one glass of wine. There are also flights to Bishkek on Turkish Airlines.

Traveling in Kyrgyzstan: Travel Experts in Kyrgyzstan is a company that understands what being a consummate host is all about. They can arrange cultural tours, horse tours, mountain biking, dirt biking, four-wheel drive, skiing, trekking and much more. You can rent cars or 4×4’s from luxury models to economy. Their drivers are excellent should you prefer not to self-drive. Travel Experts can book you into the best hotels in Bishkek, most remote yurts or village guesthouses. They’re award-winning and have well-trained guides.

Accommodation: CBT (Community Based Tourism Association) guesthouses are rated in edelweisses instead of stars with the highest being four flowers. The highest-rated guesthouse in Kyrgyzstan is three edelweisses. This means it has indoor toilet facilities, is clean and is environmentally responsible. The CBT checks the guesthouses every spring and gives them their ratings. 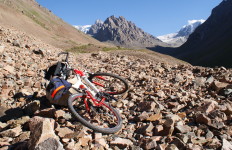 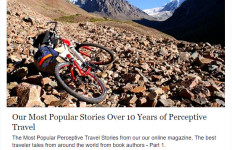